ACROSS THE Cuyahoga River from downtown Cleveland, men and women dressed in brightly colored clothing harvest vegetables from tidy rows of plantings. Multilingual conversations take place in Hindi, Nepali, Somali and English. With the Cleveland skyline as their backdrop, these refugee farmers nurture their connection to the land and to their new home.

In 2010, the Cleveland nonprofit The Refugee Response created The Refugee Empowerment Agricultural Program (REAP) to support resettled refugees in the Cleveland area through farming. During the year-long program, men and women from Afghanistan, Nepal, Bhutan, Burundi, Myanmar, and Somalia learn language and job skills as they work the six-acre Ohio City Farm—one of the largest urban farms in the nation.

This year, REAP expects to harvest 22,000 pounds of produce from the farm’s hoop houses and fields. The Refugee Response leases nearly five acres of the Ohio City Farm from the Cuyahoga Metropolitan Housing Authority.

Since Donald Trump took office in January, the United States has become a less friendly place for people born in other countries. But various community groups across the U.S. have long supported refugees—often through efforts focused on agriculture.

In addition to REAP in Cleveland, projects such as Plant It Forward in Houston, New Roots in San Diego, and the Refugee Urban Agriculture Initiative in Philadelphia have found that refugees and urban farming are a good fit, and despite the hostility at the federal level, they remain committed to their work.

“We did a survey, and 80 percent of people who were coming as refugees have some sort of agricultural background,” said Refugee Response Director of Agricultural Empowerment Margaret Fitzpatrick.

That makes a farm an ideal entry into the American work force. In addition, Fitzpatrick explained, people are coming from all kinds of backgrounds, often with a history of violence and trauma. Refugees find farm work comforting and therapeutic.

REAP graduate Lar Doe has been working for REAP since 2012. Although he was born in Myanmar, Doe grew up in a refugee camp on the border of Myanmar and Thailand.

After spending nearly 15 years there, he was granted permission to move to the U.S. in 2010. His first jobs were in Kentucky and Iowa, but then he accepted an invitation from the Refugee Response to relocate to Cleveland. He was one of REAP’s first refugee employees.

“It is a diverse city. You can find many different people from different countries,” he said. “I feel like the local people here understand about the world.”

Cleveland has a long history of welcoming refugees; since 1983, 17,000 displaced people have settled in the city. To better serve Cleveland’s increasing population of refugees, 16 organizations pooled their resources to form the Refugee Services Collaborative of Greater Cleveland in 2011. Collaborative members come from county refugee-resettlement agencies, area school systems, healthcare providers, and community and faith-based organizations.

As part of the program, trainees spend 28 hours each week on the farm and 12 hours in the classroom learning English as a Second Language. Farm work includes planting, seeding, harvesting, packing and delivery. For their farm and classroom time, they earn $9 an hour.

“The farm provides a step into employment in an area where people are comfortable (farming) with a skill set that people already have (farming),” Fitzpatrick said. Graduates of the program have gone on to work in the food service industry or been hired to work for REAP itself.

REAP also teaches participants about U.S. workplace culture. “The idea of being to work on time, calling a manager if you are sick, time sheet—those are things we take for granted being U.S. citizens, but these are skills that are not necessarily taught before they arrive,” Fitzpatrick said.

Doe talks about the differences in workplace culture: “[At home,] if you work and you get tired, you can rest, and if you feel OK, you can go back to work,” he said. “I always suggest to new refugees that they have to be patient, because the way that they work in their home country might be totally different than here.”

Located on the west side of the city, next to public housing and across the street from the city’s oldest farmers’ market, the farm is ideally positioned to help integrate refugees into the diverse fabric of American life.

“I’m very fortunate to have this job here, because this is an opportunity that I can get involved to the community and also learn more about the people and culture,” Doe said.

Refugees have the opportunity to practice English with visitors touring the farm, with Americans volunteering on the farm, with REAP staff, with members of REAP’s 60-person CSA, and with customers at the weekly farm stand.

Before coming to Cleveland, Doe worked at a meat packing plant. “The job I used to work before, it was hard to get involved in the country,” he said. “You only go to work and come back. You may never feel like it is your home.”

The community aspect of the program also appeals to Lachuman Nopeney, a 52-year-old refugee from Bhutan who spent 20 years in a refugee camp in Nepal and came to the U.S. in 2009 with no work experience and few English skills.

He worked at a restaurant in Milwaukee, where talking wasn’t encouraged. After going through REAP in 2016, however, he was hired by The Refugee Response to work on the farm.

“I’m happy,” he said with a broad smile. With the help of Refugee Response staff and other refugees, he is learning English. He likes his job of “working, joking, talking.”

“It’s more than a job,” said Refugee Response Executive Director Patrick Kearns. “The people in the program become like family to each other.”

According to Fitzpatrick, Cleveland is a diverse city that celebrates different cultures. As a result, The Refugee Response has formed solid partnerships with area restaurants including Great Lakes Brewing Company, Urban Farmer, and The Flying Fig.

In addition to buying produce, these and other local restaurants hold fundraising events, host dinners on the farm, and even employ REAP graduates. As one of the founders of the Ohio City Farm, the Great Lakes Brewing has a special interest in REAP and currently pays REAP to grow vegetables, herbs, and hops on the restaurant’s one-acre parcel of the Ohio City Farm.

“We’re very fortunate to be surrounded by a lot of local food restaurants here in Cleveland,” Fitzpatrick said.

Lar Doe says he is proud of his job. “I want to do something for the community,” he explains. As a refugee and a relatively newcomer to the country, his options to help build community may be limited. “English is the big issue for me. This [farm] is about the only thing we can do to make the city proud.” 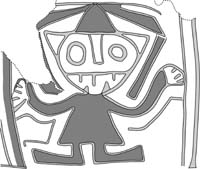 IN 2003 RESEARCHERS in Peru’s Patavilca River Valley uncovered a 4,000 year-old-gourd fragment that appears to be the oldest identifiable religious icon in the Americas. The fragment bears the image of the Staff God, which was the main religious figure in South America until the Europeans arrived in 1532. Radiocarbon dating of the gourd to 2250 B.C. suggests that organized religion began in the Americas some 1,000 years earlier than previously determined.

Members of the Proyecto Arqueológico Norte Chico — Jonathan Haas of The Field Museum in Chicago, Winifred Creamer of Northern Illinois University, and Peruvian archaeologist Alvaro Ruiz — discovered the icon while they were collecting artifacts at a looted burial ground along the coast of Peru.

“We did some surface collection and found this gourd fragment,” Haas said. “We looked at it and everybody’s jaw dropped and we said, ‘This has all the characteristics of the Staff God.’ ”

The drawing’s simplicity hinted at its age, and radiocarbon dating proved that this was the oldest image of the Staff God any researcher has uncovered so far. The team found a similar image also painted on a gourd at a nearby cemetery.

Worshiped as the creator, the Staff God appears in temples and artifacts throughout Andean cultures spanning thousands of years. The Staff God is recognizable by its fangs, splayed feet, and snake iconography. It is usually drawn with a staff in one or both of its hands and with snakes on a belt, on its hands, or coming out of its head.

The icon Haas and his team found has splayed feet, a fanged mouth, and holds a staff. The left hand is curved in the form of a snake.

“The Staff God undergoes change and evolution over the course of  2,000 to 3,000 years. It emerges during the Inca time as the Creator God,” Haas explained.

Haas and his colleagues were working 120 miles north of Lima in the Norte Chico region of the Peruvian Coast. The region’s four coastal valleys were densely populated between 2600 B.C. and 2000 B.C.

“To date, 26 major centers have been recorded in the Norte Chico region, all with monumental architecture, large-scale ceremonial structures, and complex residential and administrative architecture,” Winifred Creamer said. “It is a truly unique concentration of settlements anywhere in the Americas.”

In 2001, Creamer and Haas’ research team determined that around 2600 B.C. ancient Peruvians were building a complex city with pyramids at around the same time as the ancient Egyptians built their cities and pyramids.

Haas suggests that the Norte Chico region is the cradle of Andean civilization. The area would eventually give rise to the Inca empire, who during the height of their reign in the 1500s, ruled the largest empire on Earth.

The 2003 artifact pushes back the starting point for Andean religion and civilization and shows the Staff God at its most basic representation.

“What we’re seeing with Andean religion is although it has many different forms throughout its lifetime, it has a central core to it and that central core is arising in the 3rd millennium B.C.,” Haas said.