MARAUDING PIRATES, bloodthirsty mercenaries and roughneck gold rushers all played a part in the history of the colonial city of Granada, Nicaragua. But in spite of being burned to the ground twice and taken over as a stronghold for a foreign filibuster, Granada has managed to persevere and even prosper—while emerging as Nicaragua’s best hope for its entry into the international tourism market.

History dominates Granada’s landscape. Founded by Francisco Hernández de Córdoba in 1524, Granada is known as the oldest city in the Americas. Additionally, in 1524, Córdoba founded the Nicaraguan city of León to the North. The two cities have sustained a long rivalry since then.

Nicaragua became a republic in 1835; and in the years that followed, Granada—which supported a wealthy and conservative populace—and León—whose citizens were much more liberal—battled for dominance of the fledgling nation. Hostilities increased irreparably in the 1850s resulting in a civil war. Once Managua was chosen as the capital of Nicaragua in 1857, the fighting diminished.

Looming over this colonial city is the now dormant volcano Mombacho.”

Granada became Spain’s showcase for elegant colonial buildings and high society, and the city’s residents prospered. Because of its proximity to Lake Nicaragua—which provides access to the Caribbean Sea via the San Juan River—Granada flourished through commerce and trade.

This access also made Granada vulnerable to Dutch, French and English pirates who attempted to invade and then destroy Granada. When Granada’s most important churches and buildings were burned by outside forces, its citizens would rebuild their beloved city again.

Another source of wealth was Cornelius Vanderbilt’s Accessory Transit Company that was used to transport thousands of gold-rushers to California. In the 1800s the most expeditious route from New York to San Francisco was to go through Central America. From the Caribbean, prospectors followed the San Juan River inland to Lake Nicaragua and then crossed Nicaragua by stagecoach to the Pacific Ocean.

Granada’s strategic location on the gold route attracted the attention of William Walker, a well-known 49ner living in California. In partnership with Granada’s bitter rivals in León, Walker contracted 300 men described as “colonists liable to military duty” for an expedition to Nicaragua. What followed was a series of military campaigns against Granada beginning in 1855.

Walker and his men eventually conquered Granada and ruled Nicaragua for nearly two years. Walker even managed to win a presidential election. During his presidency, he drafted a new constitution that reinstituted slavery and made English the official language. To gain favor and financial support from wealthy Southerners in the United States, Walker promoted the idea of establishing a slave trade in Central America.

Once Nicaragua’s neighbors, Costa Rica, Guatemala, Salvador and Honduras, began to suspect that Walker might infiltrate their territories, they joined with the most powerful enemy Walker had made—Cornelius Vanderbilt—to depose Walker and his men.

Vanderbilt used his Accessory Transit Company to shut off Walker’s only means of communication with the United States. He withdrew his ocean steamers and left Walker without men or ammunition, and he hired soldiers of fortune to block any attempt at escape to the Caribbean. He aligned with the Costa Ricans and contributed both money and men to wage war against Walker.

Boxed in with no way of securing additional men and supplies, Walker reluctantly retreated from Granada. Unfortunately, upon leaving Granada, Walker ordered his troops to burn the city to the ground, leaving behind many destroyed or damaged colonial buildings and an ominous placard declaring, “Here was Granada.”

Even after he was expelled from Granada, Walker planned to return to the country to which he believed he was the rightful ruler. At the end of his book, The War in Nicaragua, he wrote:

“The history of the world presents no such Utopian vision as that of an inferior race yielding meekly and peacefully to the controlling influence of a superior people… I trust the foregoing narrative shows that the stronger race kept throughout on the side of right and justice. Nor kings nor presidents can arrest a movement based on truth and conducted with justice.”

In 1857 he attempted once more to take over Granada but was arrested and sent back to the United States. The last paragraph of his book illuminates his mindset at that time:

“By the bones of the moldering dead at Masaya, at Rivas, and at Granada, I adjure you never to abandon the cause of Nicaragua. Let it be your waking and your sleeping thought to devise means for a return to the land whence we were unjustly brought. And, if we be but true to ourselves, all will yet end well.”

After writing those words, Walker returned to Central America one more time where he was captured by the British and turned over to a Honduran firing squad.

In the book, The Real Soldiers of Fortune published in 1906, writer Richard Harding Davis portrayed Walker as defiant to the end. Squarely he faced his executioners and declared in Spanish:

“I die a Roman Catholic. In making war upon you at the invitation of the people of Ruatan I was wrong. Of your people I ask pardon. I accept my punishment with resignation. I would like to think my death will be for the good of society.”

Davis described the final chilling moments of Walker’s life: “From a distance of twenty feet three soldiers fired at him, but, Walker was not dead. So, a sergeant stooped, and with a pistol killed the man who would have made him one of an empire of slaves.”

Granada’s tumultuous history is chronicled at the Museo del Convento de San Francisco located next to the blue and white Igelsia de San Francisco. Founded in 1529 under the name Inmaculada Concepción by Fray Toribio Benavente Motilinia, the convent mirrors the history of Granada.

It was built in 1529, attacked by the English pirate Henry Morgan in 1665 and burned again in 1685. More than 100 years later in 1856, William Walker commandeered the church to house his troops and intern his prisoners. The Iglesia de San Francisco was one of the buildings Walker destroyed when he fled the city with his men. 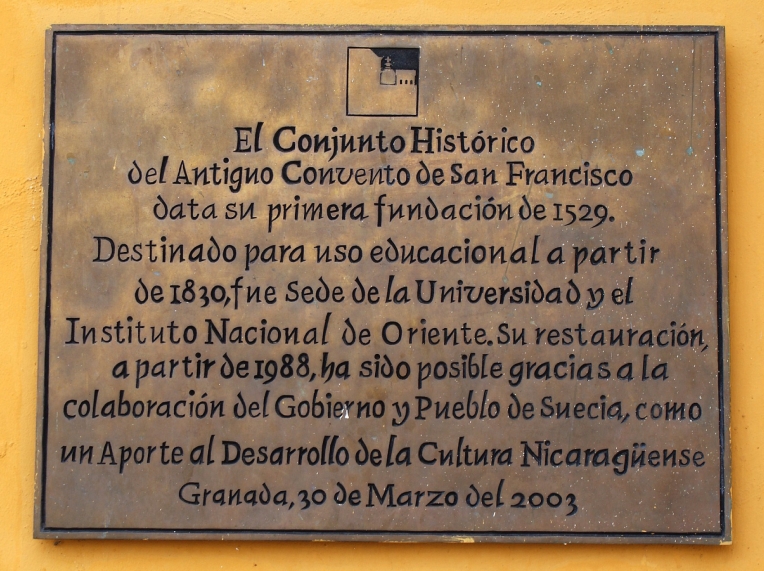 Today the covenant and church have been restored, most recently with aid from the Swiss government. Rooms surrounding the museum courtyard display paintings, religious artifacts, a scale model of the city of Granada and pre-Columbian stone sculptures from Zapateria Island in Lake Nicaragua. Sprawling catacombs underneath the convent and church house the remains of priests and other prominent citizens of Granada dating back to 1546.

A second museum named Mi Museo, which is free to the public, specializes in pre-Colombian pottery. Under glass on top of plain, white pedestals are ceramics from throughout Central America that date from 2,000 BC to 1550 AD.

This private collection is open to the public due to the generosity of its Danish owner Peder Kolind. In addition to receiving nearly 12,000 visitors a year from Nicaragua and other countries, the museum supports archeological digs and restores ceramic archeological pieces.

Behind thick wooden doors and wrought iron gates are colonial homes with 12-foot high adobe walls, ornate pillars and dark wooden accents. The living areas of the homes are typically built around a garden courtyard complete with a bubbling fountain and a squawking parrot or two. When remodeling a home in the historic center of the city, owners have to follow strict regulations to keep in line with the true traditional Spanish colonial architecture.

The people of Granada are proud of their city’s resilience. The faithful regularly worship in churches blackened from the fires of the past. A standard horse and buggy tour through the city takes visitors to William Walker’s old house—now a high-end souvenir shop—and past several of the buildings Walker burned to the ground. The local tour guide describes Walker plainly as “muy malo.”

Looming over this colonial city is the now dormant volcano Mombacho. Even though it hasn’t errupted  in the past 1,000 years, visitors can visit cracks in the Earth called fumaroles where clouds of sulfur drift out of the ground. From the top of Mombacho, Granada appears to be a flotilla of red tile roofs floating between Lake Nicaragua to the east and Laguna de Apoyo to the west.

In June, INTUR hosted the country’s first International Tourism Fair at the Crowne Plaza Convention Center in Managua. “Many countries had a decrease in foreign tourists, and yet, Nicaragua showed positive results both in tourist arrivals and revenues in the sector,” says Nicaraguan Tourism Board President Mario Salinas. According to INTUR, the amount of foreign tourists to visit Nicaragua in 2009 was 931,904, representing an increase of 8.6% compared to 2008.

INTUR predicts that at the end of 2010, Nicaragua will receive around 1 million tourists, 7.5 percent more than in 2009. The agency also forecasts an increase in activity revenue of $400 million, a 14 percent increase over the previous year.

One way that Granada has successfully attracted international tourists is through its Spanish schools. Students stay with a local host family while attending intensive Spanish classes.

As a tourist destination, Granada has long been popular with backpackers from Europe. Plenty of low-budget hostels and cheap, but, tasty restaurants are located close to the central Plaza.  The streets are safe to stroll on, and the people are courteous to foreigners. A variety of higher end hotels with full service rooms are located in the tourist part of town.

Many travelers like to use Granada as a base to explore Ometepe Island in Lake Nicaragua, nearby Volcan Mombacho and the cities of Masaya and Leon.